The key report this week is CPI.

Other key reports include April job openings, and the April trade balance.

6:00 AM ET: NFIB Small Business Optimism Index for May. 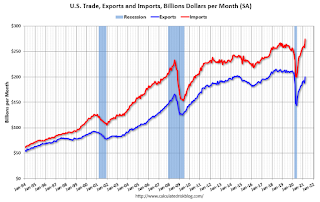 8:30 AM: Trade Balance report for April from the Census Bureau.


Both imports and exports decreased sharply due to COVID-19, and have now bounced back (imports much more than exports). 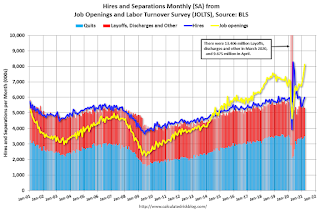 10:00 AM ET: Job Openings and Labor Turnover Survey for April from the BLS.

Jobs openings increased in March to 8.123 million from 7.526 million in February.

7:00 AM ET: The Mortgage Bankers Association (MBA) will release the results for the mortgage purchase applications index.
—– Thursday, June 10th —–

8:30 AM: The initial weekly unemployment claims report will be released.  The consensus is for a decrease to 380 thousand from 385 thousand last week.

12:00 PM: Q1 Flow of Funds Accounts of the United States from the Federal Reserve.

10:00 AM: University of Michigan’s Consumer sentiment index (Preliminary for June).