The BEA released the Personal Income and Outlays report for May:

The following graph shows real Personal Consumption Expenditures (PCE) through May 2021 (2012 dollars). Note that the y-axis doesn’t start at zero to better show the change. 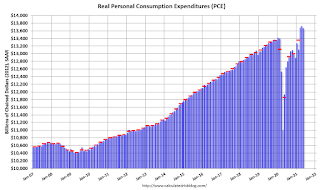 The dashed red lines are the quarterly levels for real PCE.

Using the two-month method to estimate Q2 PCE growth, PCE was increasing at a 16.2% annual rate in Q2 2021. (using the mid-month method, PCE was  increasing at 18.2%). However, this reflects the impact of the American Rescue Plan in April and May, and overall Q2 growth will be lower than those estimates.