Mortgage applications increased 2.1 percent from one week earlier, according to data from the Mortgage Bankers Association’s (MBA) Weekly Mortgage Applications Survey for the week ending June 18, 2021.

“Mortgage rates increased last week, with the 30-year fixed rate rising to 3.18 percent – the highest level in a month. Despite the jump in rates, refinances increased for the second consecutive week, pushed higher by a 4 percent bump in conventional refinance applications,” said Joel Kan, MBA’s Associate Vice President of Economic and Industry Forecasting. “Purchase applications have regained an upward trend over the past few weeks. Activity was slightly higher for the third straight week, but remained lower than the same week a year ago. Government purchase applications drove most of last week’s increase, which also contributed to a slightly lower overall average purchase loan size.”
…
The average contract interest rate for 30-year fixed-rate mortgages with conforming loan balances ($548,250 or less) increased to 3.18 percent from 3.11 percent, with points increasing to 0.48 from 0.36 (including the origination fee) for 80 percent loan-to-value ratio (LTV) loans.
emphasis added 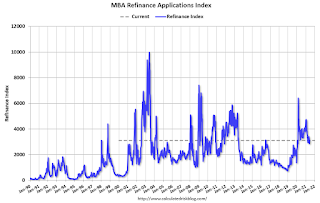 The first graph shows the refinance index since 1990.

With low rates, the index remains elevated, and picked up this week as rates declined. 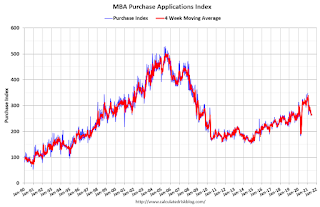 According to the MBA, purchase activity is down 14% year-over-year unadjusted.

Note: The year ago comparisons for the unadjusted purchase index are now more difficult since purchase activity picked up in late May 2020.


Note: Red is a four-week average (blue is weekly).

NAR: Existing-Home Sales Decreased to 5.80 million in May