From the Fed: Industrial Production and Capacity Utilization

In May, at 99.9 percent of its 2017 average, total industrial production was 16.3 percent higher than it was a year earlier but 1.4 percent lower than its pre-pandemic (February 2020) level. Capacity utilization for the industrial sector rose 0.6 percentage point in May to 75.2 percent, a rate that is 4.4 percentage points below its long-run (1972–2020) average.
emphasis added 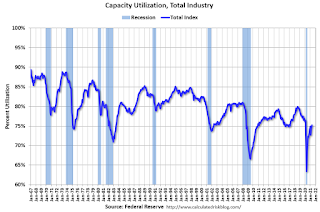 This graph shows Capacity Utilization. This series is up from the record low set in April, but still below the level in February 2020. 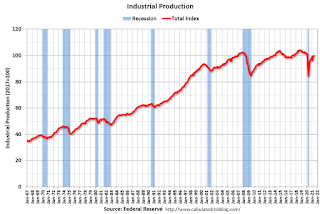 The change in industrial production was below consensus expectations.