Note: The year-over-year occupancy comparisons are easy, since occupancy declined sharply at the onset of the pandemic.  So STR is comparing to the same week in 2019.

The occupancy rate is down 10.3% compared to the same week in 2019. Leisure (weekend) occupancy has recovered, but weekday (more business) is still down double digits.

From CoStar: STR: US Hotel Occupancy at Highest Weekly Level Since November 2019

While weekday occupancy was still down double digits from the corresponding days in 2019, weekend occupancy was 0.2% (Friday) and 3.2% (Saturday) higher than the 2019 comparables. On a total-room-inventory basis, which includes those hotels temporarily closed due to the pandemic, total week occupancy was higher than 60% for the first time since the beginning of the pandemic. ADR and RevPAR were also the highest of the pandemic era on an absolute basis.
emphasis added 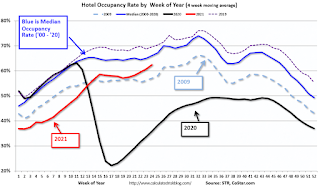 Occupancy is now above the horrible 2009 levels and weekend occupancy (leisure) has been solid.