The net worth of households and nonprofits rose to $136.9 trillion during the first quarter of 2021. The value of directly and indirectly held corporate equities increased $3.2 trillion and the value of real estate increased $1.0 trillion. 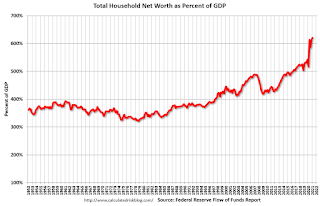 The first graph shows Households and Nonprofit net worth as a percent of GDP.

With the sharp decline in GDP in Q2, net worth as a percent of GDP increased sharply.  This reversed somewhat in Q3 as GDP bounced back (even as net worth increased).   But now net worth as a percent of GDP is at an all time high.
This includes real estate and financial assets (stocks, bonds, pension reserves, deposits, etc) net of liabilities (mostly mortgages). Note that this does NOT include public debt obligations. 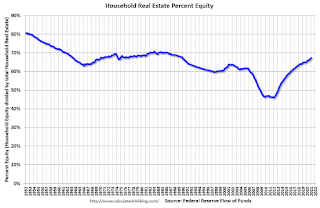 Household percent equity (as measured by the Fed) collapsed when house prices fell sharply in 2007 and 2008.

Note: about 30.3% of owner occupied households had no mortgage debt as of April 2010. So the approximately 50+ million households with mortgages have less than 67.3% equity – and about 1.4 million homeowners still have negative equity. 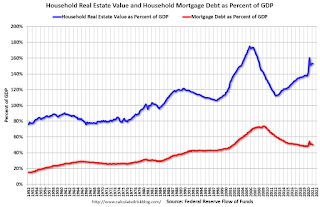 The third graph shows household real estate assets and mortgage debt as a percent of GDP.  Note this graph was impacted by the sharp decline in Q2 GDP.

The value of real estate, as a percent of GDP, increased in Q1, and is above the average of the last 30 years.