Earlier: NAR: Existing-Home Sales Decreased to 5.80 million in May

1) Existing home sales are getting close to pre-pandemic levels. Although seasonally adjusted (SA) sales for May were the highest since 2006, sales Not Seasonally Adjusted (NSA) in May 2021 were below the sales for May in 2017, 2018 and 2019.

Some of the increase over the previous ten months was probably related to  record low mortgage rates, a move away from multi-family rentals, strong second home buying (to escape the high-density cities), a strong stock market and favorable demographics.
Also, the delay in the 2020 buying season pushed the seasonally adjusted number to very high levels over the winter.   This means there are going to be some difficult comparisons in the second half of 2021!

2) Inventory is very low, and was down 20.6% year-over-year (YoY) in May.  Also, as housing economist Tom Lawler has noted, the local MLS data shows even a larger decline in active inventory (the NAR appears to include some pending sales in inventory). Lawler noted:

“As I’ve noted before, the inventory measure in most publicly-released local realtor/MLS reports excludes listings with pending contracts, but that is not the case for many of the reports sent to the NAR (referred to as the “NAR Report!”), Since the middle of last Spring inventory measures excluding pending listings have fallen much more sharply than inventory measures including such listings, and this latter inventory measure understates the decline in the effective inventory of homes for sale over the last several months.”

It seems likely that active inventory is down close to 50% year-over-year.

Months-of-supply at 2.5 months is still very low, but above the record low of 1.9 months set in December 2020 and January 2021.  Inventory will be important to watch in 2021, see: Some thoughts on Housing Inventory 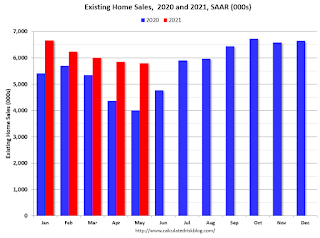 The year-over-year comparison will be easy in June, and then difficult in the second half of the year.

The second graph shows existing home sales for each month, Not Seasonally Adjusted (NSA), since 2005. 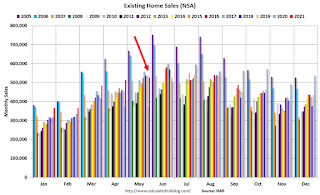