This gives a total of 4.95% delinquent or in foreclosure.

“Home prices grew at 14.8% on an annual basis in April,” said Graboske. “That’s the highest annual home price growth rate we’ve ever seen – and Black Knight’s been tracking the metric for almost 30 years now. Single-family homes saw the greatest gains, with prices up 15.6% from last April, also an all-time high, while condo prices are up 10%. Driving this growth are two key elements: historically low interest rates and – more acutely – the lack of available for-sale inventory. The total number of active listings was down 60% from the 2017 to 2019 average for April. It’s not getting any better, either. Data from our Collateral Analytics group showed there was two months’ worth of single-family inventory nationwide in March, the lowest share on record and trending downward. In fact, there were 26% fewer newly listed properties in April as compared to pre-pandemic seasonal levels.
emphasis added 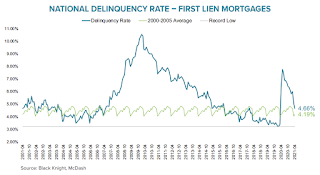 Here is a graph on delinquencies from Black Knight:

• That said, the overall delinquency rate has been improving at a much faster rate than later stage delinquencies

• That scenario is unlikely, however – 90-day delinquencies will reach an inflection point later this year as forbearance plans expire and many homeowners return to making mortgage payments

• As of the end of April, there are still 1.8M such serious delinquencies, 1.3M more than prior to the pandemic 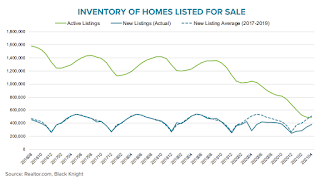 And on existing home inventory from Black Knight:

• While new listings in April were up 33% year-over-year, that was from a pandemic stricken April 2020, when listing volumes had fallen off significantly

• There were 26% fewer newly listed properties in April as compared to pre-pandemic seasonal levels, roughly on par with the 26-29% deficits seen over the first three months of the year

There is much more in the mortgage monitor.

AAR: May Rail Carloads down, Intermodal Up Compared to 2019

New Hampshire Real Estate in May: Sales Up 12% YoY, Inventory Down 55% YoY