Congratulations to the residents of California and Pennsylvania on joining the 80% club! Go for 90%!!! (80% of adults have had at least one shot).

The 7-day average deaths is the highest since May 19th.

According to the CDC, on Vaccinations.

KUDOS to the residents of the 21 states and D.C. that have achieved the 70% goal (percent over 18 with at least one dose): Vermont, Hawaii, Massachusetts, Connecticut, Maine, New Jersey, New Mexico, Rhode Island, Pennsylvania, California are at 80%+, Maryland, Washington, New Hampshire, New York, Illinois, Virginia, Delaware, Minnesota, Oregon, Colorado, Florida and D.C. are all over 70%. 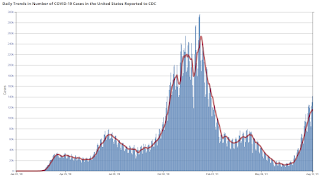 The current wave is already the second worst for cases although there was limited testing during the first wave.