First, on the economic impact of the delta variant from BofA today:

‘Our big data business cycle indicator is at risk of a regime shift from “boom” to “soft patch” because of the Delta wave.’

Florida and Texas are in a serious crisis (see graphs and comments at bottom).

The 7-day average deaths is the highest since May 22nd.

According to the CDC, on Vaccinations.

KUDOS to the residents of the 21 states and D.C. that have achieved the 70% goal (percent over 18 with at least one dose): Vermont, Hawaii, Massachusetts, Connecticut, Maine, New Jersey, New Mexico and Rhode Island are at 80%+, Pennsylvania, California, Maryland, Washington, New Hampshire, New York, Illinois, Virginia, Delaware, Minnesota, Oregon, Colorado, Florida and D.C. are all over 70%. 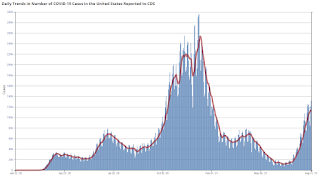 The current wave is already the second worst for cases although there was limited testing during the first wave.

Hospitalizations in Florida are already at a record level, and Florida is running out of ICU beds.

According to data from the HHS on hospital utilizations, over 90% of ICU beds in Florida are occupied, and more than half of those are COVID patients.  Grim


And on Texas, from the Texas Tribune: “I am frightened by what is coming”: Texas hospitals could soon be overwhelmed by COVID-19 caseload, officials say

Texas hospitals are on the brink of catastrophe, close to being completely overwhelmed by COVID-19 patients, leaders of some of the state’s largest hospitals told state lawmakers Tuesday.

Official after official used their strongest descriptions to get the point across to legislators: Hospitalizations are rising too fast for them to keep up with, and it may be too late to do anything about it.

“While more vaccination is the only thing that can ultimately bring this pandemic to an end, we need more decisive actions now to prevent a catastrophe the likes of which we only imagined last year,” Dr. Esmaeil Porsa, CEO of Harris Health System in Houston, told the Texas Senate Health and Human Services Committee on Tuesday.